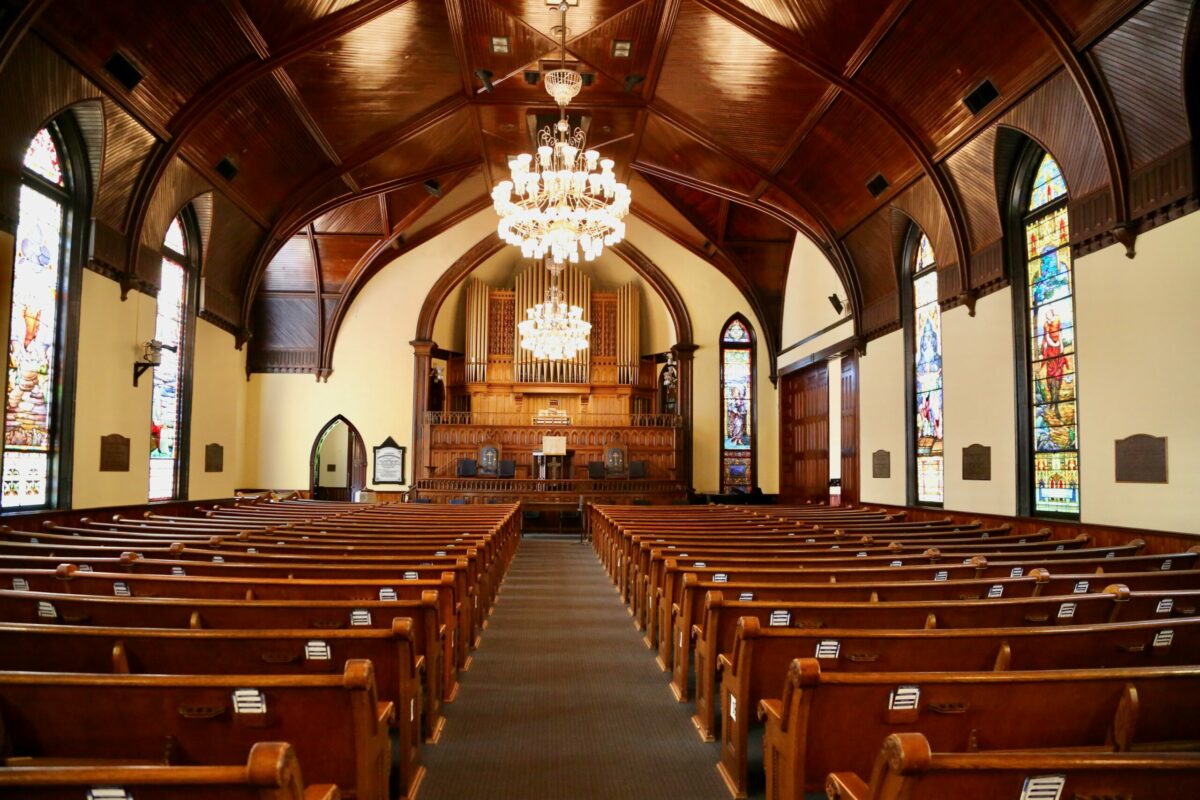 We are blessed with a beautiful church, “a model of elegance and good taste” The Mecklenburg Times announced in April 1895 in anticipation of the re-opening of the First Presbyterian Church in Charlotte following an extensive and quite expensive (just over $30,000) rebuilding and remodeling of the church. One of the new and much anticipated features of the 1894-1895 remodeling was the installation of three very large and exquisitely ornate chandeliers. “The First Presbyterian Church is to have the handsomest chandeliers in the State”, revealed the Daily Charlotte Observer in a sneak preview in 1894. Prior to the remodeling, First Presbyterian had been regarded as one the most dimly lit churches in Charlotte, having only 39 lights in total. The Session decided as early as 1888 that new lighting, and lighting with electricity, was highly desirable and some electric lights were added at that time to supplement the gas lights. Electric lighting, though a relatively new technology (it wasn’t until 1883 that the first church in the United States was wired for electricity), was much easier to use and much safer than gas. Electrical lighting was rapidly replacing gas lighting across the country.

The chandeliers that were going to adorn First Presbyterian actually had dual fuel capability, thus combining the new technology of electrical lighting with the more proven technology of gas lighting. A fail-safe system seemingly. Each of the chandeliers had 72 lights, 36 electric and 36 gas, for a total potential of 216 lights. Dim lighting at First Presbyterian was going to be a feature of the past.

A “Jubilee” service for 1,600 members and guests of the newly remodeled church was held the evening of April 21, 1895, the second of two services held that Sunday. As reported in the Observer, “The magnificent chandeliers in the main auditorium (sanctuary) were turned on full tilt, every light in the annex, upstairs and down, was burning and the effect, as can be imagined, was brilliant beyond description.” The chandeliers were an immediate delight then as they are now.

But, how did it come to pass that a Bible Belt Presbyterian church could come across such exquisite illumination? How much did they cost? Who made them? Did the church actually use both the electric and gas fixtures? And – exactly how does one go about changing the light bulbs?

The recorded details of the purchase the chandeliers are a bit scant. As mentioned above, the Session had determined the need for a total church remodeling and in 1894 appointed a Building Committee. One of the members of the committee was a prominent local physician, Dr. George W. Graham. It is Dr. Graham who is given credit for discovering the beautiful chandeliers which had recently hung in a New York City theater slated for demolition. The actual assignment for negotiating the purchase of the chandeliers was given by the committee to the very capable local merchant, real estate developer, and church member Edward Dilworth. They could have hardly made a better choice. E.D. Latta’s business acumen is legendary; he became one of wealthiest men in North Carolina. Dilworth, Latta Arcade and Latta Park still bear his name. Mr. Latta purportedly arranged for the purchase of chandeliers for $1,500 and, according to the Observer, that price represented a $1,000 discount off the asking price!

The means for transporting the fragile and immense (22 feet long by 6 feet wide) chandeliers to Charlotte is unknown. But here they made it – dazzling crystal and silver chandeliers from a New York City Gilded Age theater to a reformed church in the South.

Winches were installed in the attic of First Presbyterian in the 1980’s so that the chandeliers could be safely lowered all the way to the sanctuary floor. In 1998, as part of the church renovations of that year, and a little over a hundred years after these chandeliers were first installed, they were taken down very carefully by the winch and taken to local electrician Summerour Lamps for a thorough repair and refurbishment. Each of the 1,177 crystals was individually removed, polished and reattached. Some of the crystals had to be replaced but all the crystals in the front and back chandeliers are originals.

It was discovered at that time of the renovation that beneath years of accumulated discoloration the arms of the chandeliers were made of silver plate covering brass. The silver arms were polished and lacquered. The upper arms were wired for electricity so that all 216 lights could brightly shine as intended. As a final touch, the crystal baskets atop each of the chandeliers, which have 36 chains of 11 beads in each chain for a total of 396 beads for each chandelier, were also disassembled, polished and replaced. The final effect, with cleaned and polished silver and crystal, and with all 216 lights ablaze, was dazzling – a “brilliant ball of light”, said then Church Administrator, Seymour Robinson.

One question remains. Who manufactured these exquisite chandeliers? There is no record of the maker, yet Summerour found a tantalizing clue by discovering inside the original gas jets the stamp: “A.L. Bogart Pat. Oct.3.1871.” Though A.L. Bogart was a well-known and inventive electrician in New York, further research into the name suggests that the reference is to the patented means of igniting the gas jets, not the name of the manufacturer of the entire fixture. That remains unknown.

Today, Jim Tyndall, Operations Manager, and staff are responsible for the maintenance of these magnificent pieces of 19th century functional art. One feature not available in the original configuration is a central control panel at the back of the sanctuary that allows staff to dim the lights as necessary. This feature is very desirable for special services such as Christmas Eve, Maundy Thursday and funerals. Willie Atkins, Senior Custodian, who has looked after these chandeliers for 48 years, inspects them every Thursday. When enough of the 216 bulbs have worn out, Willie replaces them using a 30-foot safety ladder or the church’s spider lift. Bulbs are replaced with new bulbs, all dimmable and with maximum of 15 watts. Some light polishing is undertaken as needed. I think you will agree with me, First Presbyterian would not be the same without these masterpieces. We are so indebted to so many who had the foresight to purchase and maintain these chandeliers that will no doubt brighten worship service at First Presbyterian for many years and decades yet to come.