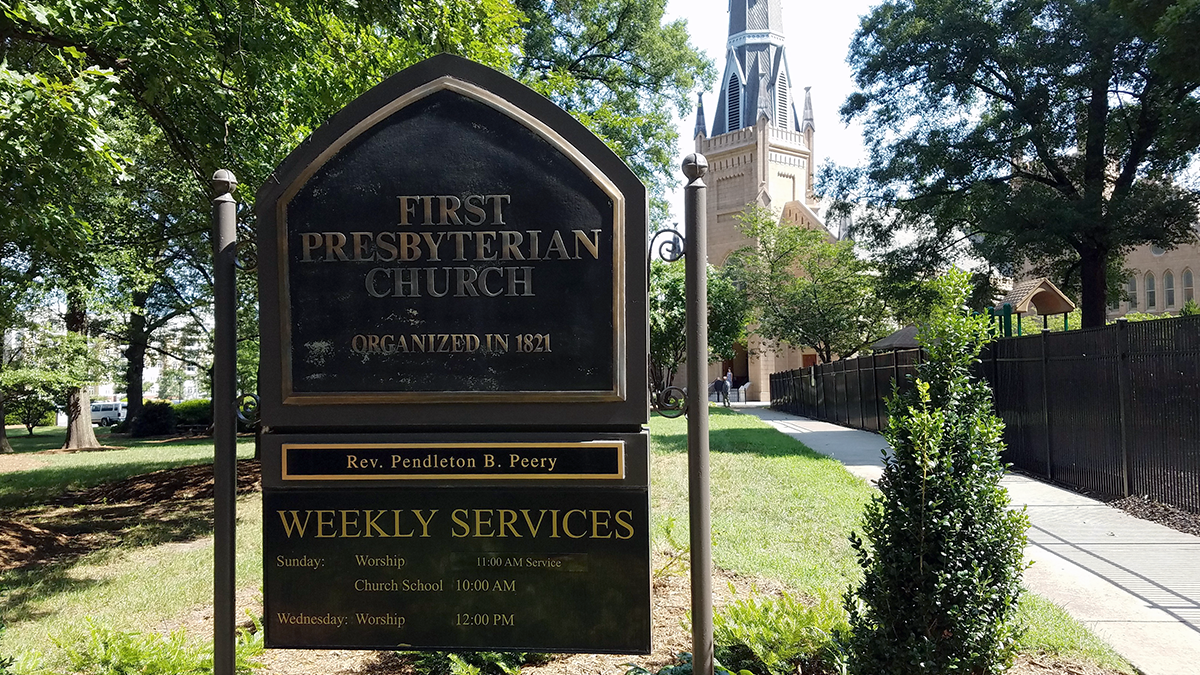 Perhaps you have noticed the large bronze tablet to the left as you enter the church. It says “First Presbyterian Church Organized 1832.” And if you had been around First Presbyterian in 1932, you would have been here for the Centennial Celebration. So what gives – why are we celebrating our Bicentennial in 2021? Turns out it’s a complicated story.

The early history of First Presbyterian contains a few twists and turns, beginning as a group of Presbyterians in the small village of Charlotte, worshipping where they could and when a minister was available. Recording their history was apparently not their top priority, and somewhere along the way folks got confused about what happened when.

But the Presbyterians were important in Charlotte from the beginning. They were by far the largest religious group in the town’s early population, and they were active in civic affairs. They often met in the courthouse at the Square, among other locations. Ministers were mostly clergy shared with other Presbyterian churches nearby, which were all outside of the small town (and many of which still exist, although now Charlotte has grown to incorporate them).  The nearest was Sugar (Sugaw) Creek Presbyterian at the corner of today’s North Tryon Street and Sugar Creek Road, and Presbyterian townsfolk often worshiped there if they could travel that “far.”

By 1821, the Charlotte Presbyterians obviously believed they had enough strength and numbers that they should be recognized as a separate church or congregation. The records of Sugar Creek Presbyterian state that “In 1821 the Charlotte members of the Sugar Creek church petitioned to be formed into a separate congregation.” And on September 5, 1821, the official minutes of the Concord Presbytery (which encompassed Charlotte at the time), meeting at Hopewell Church, recorded “a supplication from a number of inhabitants of the village of Charlotte” that they be “taken under the care of this presbytery and be known and organized as the Charlotte congregation” and that “the prayer thereof was cordially acceded to.” And thus our church was born!

The fledgling church had no regular minster, but after 1821 the annual meetings of the Concord Presbytery regularly show a “supply minister” being sent to the Charlotte church and other churches without a called minister. Worship services continued to be held in various locations until a town church building was completed in 1823. The Mecklenburg Presbytery was organized the following year, and its reports to the General Assembly in each year thereafter included a listing for the Charlotte church. This would be a listing for the Presbyterian Church of Charlotte — the First Presbyterian name was not needed or adopted until Second Presbyterian (which later merged to form Covenant Presbyterian) was established in 1873.

In the early years the Charlotte and Sugar Creek churches continued to be closely associated. They often shared ministers who traveled and preached at different churches in the area. In fact, the first called minister for First Church was called in 1827 by both the Sugar Creek and Charlotte churches, to be shared by the two. This was Dr. Robert Hall Morrison, who later became the full time pastor at Sugar Creek in 1833, but left soon thereafter after helping found Davidson College and becoming its first president.

Clearly the Presbyterian Church of Charlotte was quite active prior to 1832. So where did that date come from? We have to look no further than the earliest existing record book of First Church. The book contains an entry from Rev. Abner J. Leavenworth, pastor, recording that “36 persons connected themselves with the church, which was organized at that time, and David Parks and Nathan Carroll were appointed elders.” The same book contains a list of members, including the “List of Members up to and Including August 1832,” with one column for “list given in the old Session Book” (that book apparently did not survive) and a second column for “members admitted 4th Sabbath of August, 1832, the fruit of a previous revival.”

It seems evident that Rev. Leavenworth believed the church had existing members before the 36 who joined in 1832. And it is clear the church was recognized by the Presbytery and active prior to that time. Nevertheless, apparently Leavenworth’s words “organized at that time” were picked up by later historians, and thereafter the official records of the Charlotte Presbytery stated that the Charlotte church was organized in 1832. The date was used for a very long time, although not without ever being questioned.

When the bronze plaque at the front door of the sanctuary was installed, it carried the message forward – Organized in 1832. Then in 1932, First Church held a big Centennial Celebration. Interestingly, though, a history of the church written at the time noted that the centennial was really 11 years earlier, and that a study of the records shows “There is nothing to substantiate the 1832 date.” That set us up to have the next celebration not 100, but only 89 years later.

In 1981, our Session took the matter up, seeking to establish once and for all the correct date for the official beginning of First Presbyterian.  A committee was appointed, which reviewed the historical record carefully. Among other evidence, they took particular note of articles published in 1897 in the Charlotte Daily Observer and in 1898 in the North Carolina Presbyterian, in which the pastor of Sugar Creek Presbyterian Church had written at length on the question, concluding that “it seems to be a very well assured fact that the organization took place in 1821.” The committee recommended the following to the Session:

The recommendation of the committee was adopted by the Session without dissent on December 13, 1981.

The records of the Charlotte Presbytery were also finally changed, reflecting that First Presbyterian Church of Charlotte was indeed organized in 1821, and would be turning 200 years old in 2021. Indeed, we celebrated the 175th anniversary of First Church in 1996, setting the stage for this year’s Bicentennial Celebration.

The plaque was too beautiful and historic to remove from the front of the church, but rest assured – we’re having our party at the right time.