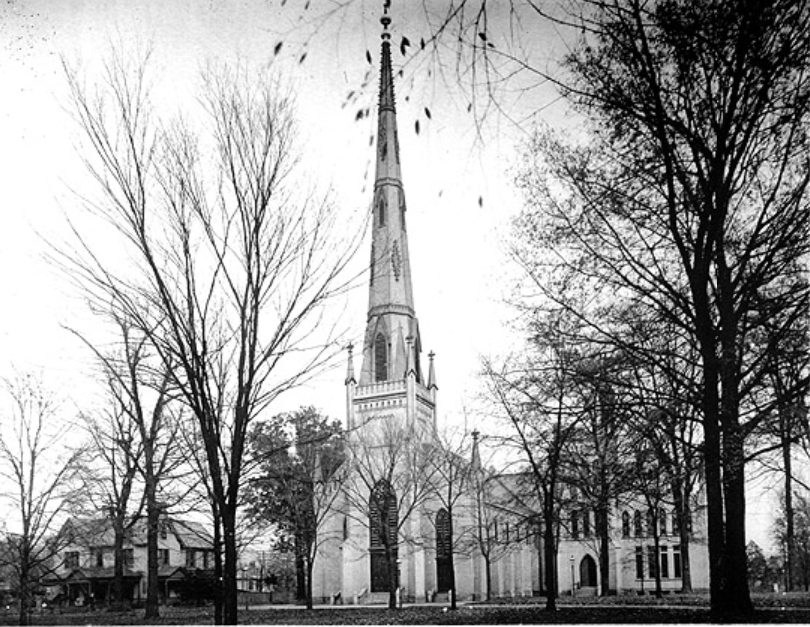 History of the Sanctuary Buildings

Most locals know that Charlotte exists where is does because of the intersection of two ancient Native American trading paths at the spot we now know as the Square – the intersection of today’s Tryon and Trade Streets. But how and when did a beautiful Gothic style church building for the Presbyterians of Charlotte, set on a full city block and just steps from the Square, come to pass? Here are a few of the key dates and events.

Before any church building existed in Charlotte, there are historical reports of at least one travelling minister, and perhaps others, preaching in a grove of trees near the blacksmith shop that was located on the present grounds of First Presbyterian. This activity appears to date back as early as the 1750s.

In 1815, the Charlotte Town Commissioners set aside lots between what is now Church and Poplar Streets to be used as a town church for all denominations (a site chosen perhaps because of its history as a location for preaching), along with a cemetery. The population of Charlotte was about 300 at the time, representing several Protestant denominations, with Presbyterians being the largest group by far. Many Charlotte Presbyterians at the time worshipped at Sugar (Sugaw) Creek Presbyterian Church about 3-4 miles north of the town. Services were also held by Charlotte’s Presbyterians from time to time in the nearby courthouse.

Construction finally began in 1818 on the first church building on the site, financed with annual subscriptions for pews and other dedicated pledges from town citizens.

The town church was constructed over a period of five years, and was owned by the Town Commissioners on behalf of the city. The building was completed and dedicated in August 1823, with a dedicatory sermon preached by Rev. Dr. Charles McCree, a Presbyterian pastor from Iredell County who had also preached in Mecklenburg. No picture or complete description of the building has been found, but it was referred to in historical records as the “Brick Church.” Apparently, it had a steeple with a spire crowned by a “gilded ball,” which was referenced in Dr. McCree’s sermon. Other records indicate a two story building with a balcony in the rear.

Even though it had been established as nondenominational, the church was often referred to, even in official city documents, as the “Presbyterian Church.”  Nonetheless, the town still owned and maintained the building for all of Charlotte’s inhabitants. Funds for the church continued to be a need, and an appeal went out in 1824 for citizens to pay their pledges for the building and enclosing the cemetery. In 1825, realizing that much of the funding for the church’s construction would not be raised from pledges and other intended sources, the Town Commissioners took out a bank loan in the amount of $1,500 to pay off the church’s debts.

Apparently enough money had been raised from pledges dedicated to acquiring a large bell for the village, and the bell was purchased in 1826 and hung in the steeple of the Brick Church. It was rung for church services and other important events in the town.

By 1835, the bank debt for the church had become a burden to the town, and the Commissioners received a proposal from Mr. John Irwin, who offered to pay off the remainder of the note in exchange for a deed to the property. The Commissioners accepted and transferred title to the church and its property to Mr. Irwin “in trust for the Presbyterians.” Six years later in 1841, upon receipt of the $674 he had paid earlier, Mr. Irwin transferred title to the property to the Trustees of the Presbyterian Church of Charlotte.  Finally the Charlotte Presbyterians had a church all their own. Title to the cemetery remained with the city, as it does to this day.

Ten years later, the congregation had grown considerably, and the church had outgrown the original town church building. Plans for a new building and a fundraising effort began in 1851, including the sale of more than 52 pews. After sufficient funds had been raised, the old Brick Church was demolished, and a new larger sanctuary was built on the same site. The congregation met in the courthouse across the street during construction.

The new sanctuary building was completed at a cost of $13,000 and occupied in the fall of 1857. It was constructed in the Gothic Revival style, using bricks made locally and covered with stucco painted and scored to resemble cut stone. The tower over the narthex and main entrance was capped with a tall steeple, which towered over the small city. The interior had a balcony at the rear for use by the choir, and gallery balconies along both side walls. An 1858 article in the North Carolina Presbyterian said of the church, “They have erected a house of worship unequaled in architectural beauty in the State.”

In 1865, an organ was purchased and donated to the church by several members. By 1873 pews were declared to be “free,” although they still had doors and were often viewed as owned by a particular member or family. Newspaper notices for First Presbyterian’s services as late as 1917 noted “free seats.”

The new building continued to serve the congregation well over the succeeding years, but by 1879 extensive renovations and repairs were needed. The church was closed down for this purpose for several months, including installation of a new roof, carpeting, and repainting of the exterior. The interior renovations also included a fresco border in the plaster above the wainscoting on the sanctuary walls, reported by the Daily Charlotte Observer to be the first frescoing ever done in Charlotte.

A damaging windstorm hit Charlotte in May of 1881, and several witnesses reported seeing the steeple of First Presbyterian swaying by one or two feet. The steeple was examined and first thought to be unharmed, but over the next two years extensive damage was discovered. A decision was made to replace the steeple. The 1857 steeple was removed in 1883 and was replaced a year later by a new one 25 feet taller, described by the local newspaper as “the handsomest steeple in the South.”

By 1894 the congregation felt it had outgrown its building again, and began making plans to add a wing to house a Sunday School and other uses, and to extend the pulpit end of the building. The balcony galleries on each side were also to be removed. The organ was moved to the YMCA and construction began, with services being held in the YMCA’s main hall during construction.

After the cornerstone for the addition was laid and while the galleries were being removed from the sanctuary, it was discovered that the side walls of the church were not stable, and much more demolition would be needed. The end result was that all of the church except the narthex, the tower and steeple were torn down, with a new sanctuary being built on the same foundation. The pulpit end of the building was extended by about 20 feet, and a choir loft was built to enable the choir to move from the back to the front of the church behind the pulpit. A new balcony was added at the rear. The design for the front of the church included a transept configuration, creating today’s overflow seating area on one side and “Amen Corner” on the other.

Many articles appeared in the Daily Charlotte Observer to chronicle the progress on the new structure, which was greatly admired. Features that were reported on at length included the impressively detailed plank ceiling, three massive chandeliers, beautiful stained glass windows, and the return of frescoes, this time painted by an artist brought in from Italy. Two Jubilee services, both filled to capacity, were held on April 21, 1895 to dedicate and open the new sanctuary.

It has been more than 125 years since those Jubilee services, and many changes have taken place on the First Presbyterian campus, including many new buildings. Certainly, much of the interior decoration of the church has changed multiple times, but the basic components of our main church building have remained largely the same during all this time, even though parts were built at different times. The 1857 narthex and tower over the main entrance, topped by the 1884 steeple, and the rebuilt sanctuary from 1895, would be recognizable to someone who attended those Jubilee services so many years ago.

As we approach plans for new renovations to our worship space, it is interesting to reflect on the longstanding elements of the church building that have served us well. At the same time, we can recognize that change and adaptation have always been a part of the life of our sanctuary. It would have been difficult for early Charlotteans to foresee what started as a smallish town church in a grove of trees near the old blacksmith shop growing into the impressive edifice we enjoy today. This is a building with a rich history, and a story “to be continued…”