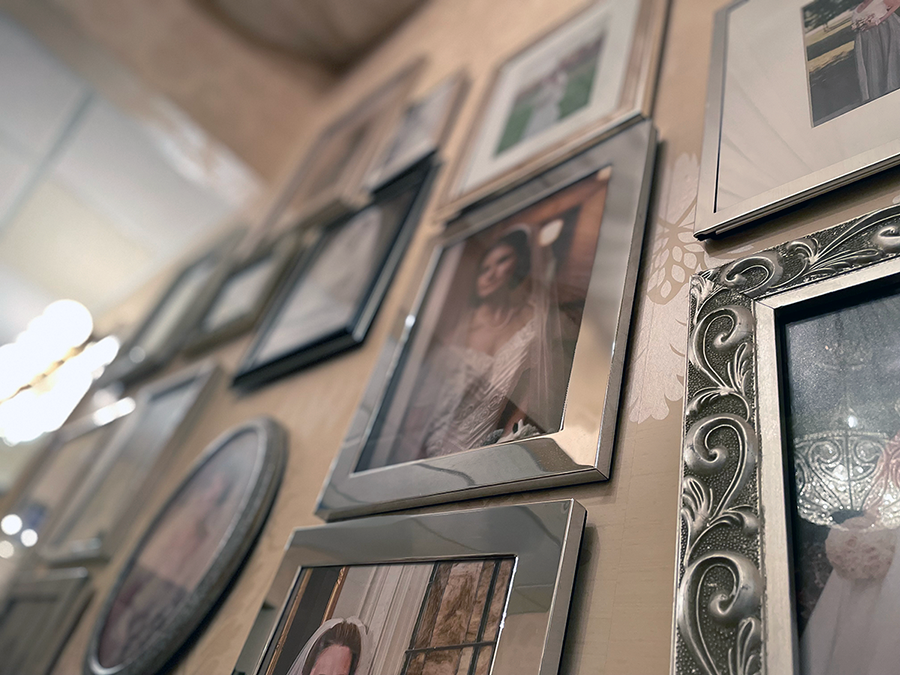 If Walls Could Talk

Most members of First Presbyterian have seen the photographs of all the ministers who have served our church that hang on the walls of the Session room. But do you know what other room in the church has walls covered with photographs showing 100 years of our history?

Continue reading to find the answer.

Unless you were married at First Pres, you may not even know that this room exists. Tucked away near the sanctuary, generations of brides have dressed for their weddings in this special little room. The Brides Room had been largely ignored for many years, and was mostly used to store additional stack chairs for nearby classrooms (except on the 8 or so Saturdays a year when weddings would take place). It got a much-needed update in 2006 as part of the redecoration of the Lemma Howerton and Patty Cole Rooms.

The carpet was replaced, the chairs reupholstered, the unattractive acoustical tile ceiling was hidden behind a treatment of lace fabric that resembles a bridal veil, from which hangs a little crystal chandelier with beading like on the bodice of a wedding gown, and the trim was painted ecru, just the color of a wedding invitation. But replacing the dated damask wallpaper just wasn’t in the budget. In an effort to cover some of it up, we decided to run a blurb in Tradewinds (FPC’s former annual magazine) asking women who had been married at First Pres to send a picture of themselves in their wedding dresses, or pictures taken at their wedding.

Then we waited to see if anyone actually would.

Within a few weeks, we had received 75 photographs of brides from every decade for the past 80 years! We framed them in a variety of little silver frames and covered the walls with them. The oldest one was from a bride from the 1920s with a flapper-style lace headpiece across her forehead (to which is attached the longest veil imaginable!) There were elegant brides from the 1930s in their satin gowns; a WWII bride from the 1940s in her dark navy blue suit; one of a 1950s wedding with a white runner down the aisle which was customary then; and more ferns and candelabra then you can count; a bride from the 1960s has flowers in her hair instead of a veil; there’s one of a wedding party from the 1970s with the bridesmaids in powder blue chiffon and the groomsmen all in matching powder blue tuxedos; the 1980s brides are mostly wearing wedding dresses with big puffy sleeves like Princess Diana’s, until the 1990s arrived and sleeves all but disappeared – strapless dresses were the style. This collection was assembled in the early 2000s, but it is always growing as a new generation of brides share their photos. On my daughter Elizabeth’s wedding day two years ago, I added hers to the wall, just before she came in to change into her wedding dress.

Three generations of Cochrane brides hang together, two sets of sisters wearing the same dress (each had the sleeves and bodice altered, but it’s the same dress!) There’s a mother and daughter and their grooms photographed 30 years apart in exactly the same spot in the sanctuary vestibule, a teacher surrounded by her entire kindergarten class, and in the hall just outside the door (across from the Lemma Howerton Room) there’s one of Lemma Howerton herself, photographed with her father on her wedding day.

There are far more pictures of men on the walls in the Brides Room than there are in the Session Room because many of the photographs include the entire wedding party. There’s even one of a minister on his wedding day (the Reverend Greg Green with his beautiful bride Kim). And, of course, the Reverend Mary Margaret Porter is one of those Cochrane brides. So, the next time you’re late for Sunday School, don’t go sit in the Library – go to the Brides Room and explore. You might find that you know lots of people in the pictures, although they may have changed just a little bit! And if you got married at First Pres but your picture is not part of the collection, it’s not too late. There’s still plenty of that old wallpaper to cover up.