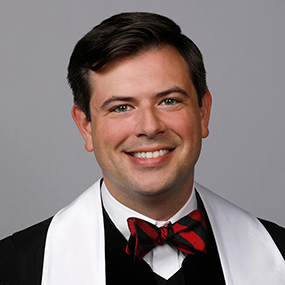 Robert Galloway attended Davidson College where he earned a BA in History in 2009. His studies focused on the Presbyterian Church in the South. After a few years working, Robert attended Princeton Theological Seminary where he earned his Master of Divinity in 2017. At Princeton, he served as the Moderator of Student Government and the Theological Student Advisory Delegate to the 222nd General Assembly. After seminary, his first call was at White Memorial Presbyterian Church in Raleigh, NC as the Pastoral Resident. Robert was called to First Presbyterian Church in 2019. Currently, Robert serves on the boards of the Presbyterian Historical Society and the Covenant Network of Presbyterians. Outside of church, Robert enjoys cooking, playing tennis, and needlepoint.

rgalloway@firstpres-charlotte.org
704.927.0234
Back to Staff Directory