An Old Window Gets a New Life

When we were building the Poplar Street Building in 2000, our receptionist answered a call from a former member who said she had a stained glass window that was original to the church and would like to give it back!

This nice lady explained that several stained glass windows from the entrance to the sanctuary had been removed during a renovation and were auctioned off to members. She bought one of them, took it home, and put it behind her living room sofa for safe-keeping until she could decide what to do with it.

Many (like 25) years later, she was preparing to move to a retirement community and her two daughters were helping clean out her house. One of them discovered it and said, “Mother, there’s a stained glass window behind your sofa!” She asked which of them would like it, but they both quickly declined the offer. What was she going to do with it? 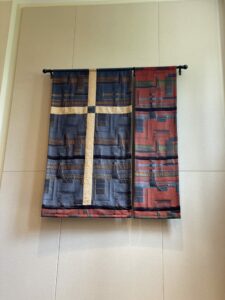 Banners hanging in the Fellowship Hall

She had recently read about the construction of a new building at First Pres in the newspaper, and thought maybe we could incorporate it. Dan Woodall asked me to go have a look… and I came back with a beautiful round window. But the new building was already under construction and we didn’t have a spot for it, so it was stored in the attic above the Session Room (look for a very similar round window which hangs way up high the next time you’re in the Session Room).

About 4 years later, First Pres decided to start a contemporary worship service. We formed a committee (of course), called The Reverend Gregg Green to lead it, and named it First@5. I joined the Praise Band (life-long dream… Rock ‘n Roll band!) and got to know Gregg. He soon discovered that I was a better interior designer than guitarist and back-up singer, and asked me to help transform the space from a fellowship hall into a worship space every Sunday evening. When we decided to have a pulpit made, I asked Gregg, “How would you like it to have a back-lit, beautiful round stained glass window original to the church in it?”

We commissioned a local craftsman to build the pulpit piece, and that’s how the old window found a new home.

We also designed 4 large banners to hang in the fellowship hall, but were having trouble finding someone to make them. The upholsterer said to call the drapery workroom; the 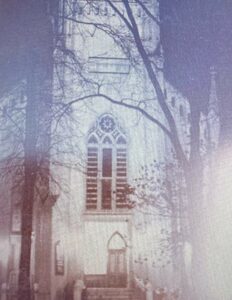 Stoke Caldwell found this old photograph after reading this article. Look way up high over the entrance to the sanctuary.

drapery workroom said to call the upholsterer. When our associate minister Katie Crowe heard about this she said, “My mother could make those,” so we crossed our fingers and sent her the fabrics and design sketches. A few weeks later four beautifully crafted banners arrived!

Now back to the window…

The Reverend Wes Barry changed the name of the contemporary service to Crossroads when he replaced Gregg (who had left us to become a chaplain in the U.S. Army where he did tours in Afghanistan or Iraq or maybe both). Then the Great Recession hit, and the church decided to cut internal programs instead of outreach programs. So that was the end of the contemporary service. The four banners that Katie’s mom lovingly made for us still hang in the Wood Fellowship Hall; the pulpit piece was placed outside the Ministers’ offices and remained there for many years.

Last week it was taken back to the Wood Fellowship Hall and will be used every Sunday morning in our temporary worship space while the sanctuary is being renovated. So if you were wondering where it came from, there’s your answer. But there are still so many questions…

Were those stained glass windows removed when the large one was installed over the entrance to the sanctuary? What year was that? Is there a picture that shows exactly where the windows hung? Does whoever bought the other windows still go to our church? Are they behind their sofas?

Maybe someone reading this can answer these questions… or we might just have to ask Ambrose.